Galeria Karla Osorio is participating in the first edition of the Pacaembú Art Fair in São Paulo – ArPa. Its presence will be in 2 different spaces with a total of 4 artists represented by the gallery:
– the booth A 03 (50m²) presenting 3 (three) artists Almandrade, Bené Fonteles and Matheus Marques Abú.
– the project ARTE EM CAMPO, curated by Catarina Duncan, with works by artists Bené Fonteles and Daisy Xavier.

We will present an IMPROVABLE DIALOGUE between three artists from different backgrounds, generations and styles, greatly enhancing the work of each of them.
Bené with his shamanic and ancestral poetics, in recent and ancient works that brings raw nature in dialogue with art; Almandrade visual poet in drawings, paintings and historical sculptures, some never presented to the public and Matheus Marques Abu, the youngest represented artist, who presents only unpublished paintings exploring issues of his diasporic origin in his original research still on SANKOFAS and colonial architecture.

Almandrade (1953), visual artist, architect, master in urban design, poet and professor of art theory in the art workshops of the Museum of Modern Art of Bahia and Palacete das Artes. He has participated in several collective exhibitions, among them: XII, XIII and XVI Bienal of São Paulo; “In Search of Essence” – special show of XIX Bienal of São Paulo; IV National Show; Universe of the Football (MAM/Rio); National Fair (São Paulo); II Paulista Show, I International Exhibition of Ephemeral Sculpture (Fortaleza); I Baiano Show; II National Show; Honorable mention in the I Student Show in 1972. He has participated in collective visual poems, multimedia, and installation projects in Brazil and abroad, and is one of the creators of the Language Study Group of Bahia, which published the journal “Semiotics” in 1974. He held more than thirty solo exhibitions in Salvador, Recife, Rio de Janeiro, Brasília and São Paulo between 1975 and 2018 and participated in national and international art fairs, such as SP-Arte, Art-Rio, VOLTA NY and Basel, EXPO Chicago, India Art Fair, among others. He has works in major museums in Brazil and abroad, with emphasis on the collections of the Rio Museum of Art (curated by Paulo Herkenhoff) and the Museum of Contemporary Art in Chicago. He has also published the books “O Sacrifício dos Sentidos”, “Poemas”, and “Suor Noturno”, and in print, “Arquitetura de Algodão”. His poems seek to give words of plastic intensity and he is one of the great names of visual poetry and of the Brazilian neoconcretism movement.

Bené Fonteles (1951) visual artist, journalist, editor, writer, poet and composer. He began his career in 1971, exhibiting at the 3rd National Fine Arts Salon of Ceará. In Fortaleza, he works as a journalist. During the 1970s and 1980s, he is part of several collective exhibitions, national and international, linked to postal art and research of new means of expression. During this period, he takes part in four editions of the São Paulo International Biennial (1973, 1975, 1977, and 1981). From 1974, he also held several solo exhibitions in Brazil and abroad. Between 1983 and 1986, he directed the Museum of Popular Art and Culture (MACP) at the Federal University of Mato Grosso (UFMT). In the 1980s, he became involved in projects and movements aimed at ecological preservation, seeking to unite them with artistic creation. In 1991, he moved to Brasília, where he remains active as an ecological activist and organizer of artistic events. In 1997, he organized the setting up of a special room for the Bahian artist Rubem Valentim (1922-2001) at the Museum of Modern Art of Bahia (MAM/BA). Among his published books are O Livro do Ser (1994) and O Artista da Luz (2001), about Rubem Valentim. His work as a composer is gathered in the CD Benditos, released in 2003, which gathers three previous works, Bendito (1983), Silencioso (1989), and Aê (1991). In 2003, he was awarded the Ordem do Mérito Cultural by the Presidency of the Republic.

Matheus Marques Abu (1997), self-taught artist, develops independent research on ancestry, spirituality and the African diaspora in Brazil, putting into perspective the colonial history and its reverberations in the daily lives of racialized people.
He started his work with the language of pixo (graffiti), having a strong influence of the rap scene in Rio de Janeiro, collaborated with the covers for one of the important eps of rapper BK’, Antes dos Gigantes Chegarem vol. 1 e 2. He also assisted great artists such as Panmela Castro, in the exhibition “Rua!” at Museu de Arte do Rio (MAR) and for Tomaz Viana, Toz in the show Cultura Insônia at Caixa Cultural. The painting appears during the pandemic and on a trip to Salvador he discovered another set of symbols, the “adinkra”. Brought to Brazil by enslaved people, these ideograms were carved mainly on gates and windows in imperial Brazil by enslaved black blacksmiths, composing a sophisticated form of communication and resistance to subalternity. To rescue this language through their works is at once to challenge dominant visibility regimes and the canon of Eurocentric history (including art history), bringing to light an alternative history invisible to the eyes of the colonial mind.

Daisy Xavier (1955), trained in psychology and psychoanalysis, Daisy Xavier began her artistic training in the 1980s. She attended the deepening nucleus at Escola de Artes Visuais – Parque Lage (1992) and History of Art with Paulo Sergio Duarte (2000). His works seek to investigate issues related to identities and otherness. Whether by deconstructing or recreating established forms and concepts, the artist creates images with a strong poetic charge where the body ceases to be merely physical and begins to represent permeable zones. Elements such as the net and water are recurrent in the artist’s work – be it videos, photos, installations, paintings or drawings. Both elements do not allow one to define what is inside or outside, creating interchangeable fields of constant mutation.

Karla Osorio Gallery
Created in 2016, Karla Osorio gallery is the only one in Brasília with international presence, participating in fairs in several countries. Its director has extensive experience in contemporary art. In 2000 she created ECCO – Espaço Cultural Contemporâneo which, for 15 years, was the main private non-profit institution dedicated to contemporary art in Brasília – more than 250 artists in solo and group exhibitions with educational projects, about 100 publications. Among the artists shown are AES+F, Artur Barrio, Bené Fonteles, Cildo Meirelles, Hélio Oiticica, Mario Cravo Neto, Miguel Rio Branco, Nelson Leirner, Rosângela Rennó, Sebastião Salgado, Vik Muniz, Wang Qing Song etc.
The gallery represents Brazilian and foreign artists, in the beginning or middle of their careers, and also operates in the secondary market. It privileges innovative artistic production and promotes diversified languages and techniques. Its program has an important focus on geometry, minimalism, and visual poetry, besides abstractionism in painting above all. It is also concerned with supporting artists who deal with gender issues and approach socio-political themes with precision, deepening questions about their own time. It develops a project to stimulate new collectors and to include artists in the national and international scene. 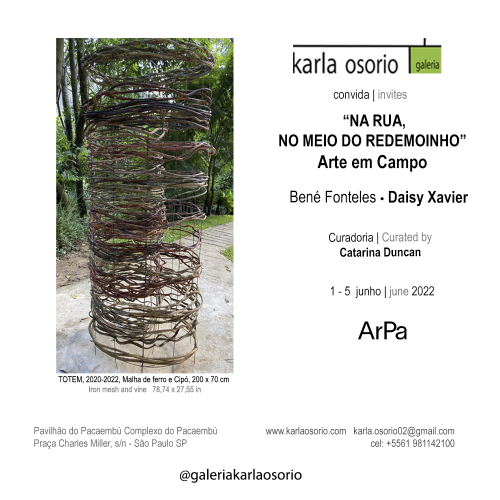