The curatorship is based on inspiration and homage to the Modern Art Week
1922, a milestone in the struggle for aesthetic changes that rescued the power of art.

African culture in Brazilian culture and which strengthened the female presence in the arts, with
artists who created masterpieces that became icons of modernism and symbols of Brazilianness that allude to blackness. 100 years later ideas that propelled the modernist movement remain current and we propose to value this moment for artistic expressions that propelled him: painting, sculpture and literature.
We present 3 young Brazilian artists.

Moisés Patrício, artist-priest with paintings, objects, photographs and sculptures imbued with the essence of their origin and inspired by entities of the religion of african trinity. Be the day-to-day of your family, of your terreiro, the memory of your ancestors or the offerings he suggests to the community, including through photographs via Instagram, rescuing essential values ​​for a fairer society.

Matheus Marques Abu, a young man from the periphery of Rio, whose research reflects on the
Atlantic traffics, rethinks and represents the ocean that unites and separates Africa and Brazil.
His painting materializes thinking about the epistemological knowledge of culture rescuing, for example, the importance of ADINKRA, creations made by
iron slaves for decorative and functional purposes (eg railings and gates), but which
carry subtly materialized linguistic nuance creating deep communication
whose meaning only they perceived.

Verena Smit lined up the dialogue delicately but poignantly. It brings two aspects essential that, synthesis of modernist values: the feminine and the poetry. The re-meaning of the words proposed by Verena Smit allows us to reorganize our cartography mental. Change the trajectory of a feeling, an opinion. Cross out a code and put in its place another, which is opposite and/or complementary. takes us to-other paths within our own mind and the social conjuncture in which we live.

In summary, we intend to highlight, through the works of Moisés, Matheus and Verena,
a little of the power, mystery and depth of Brazilian identity. All
with several unpublished works, many bringing revisited values ​​of modernism:
aesthetic freedom, nationalism and social criticism.
Welcome!

To see it live, we are waiting for you until March 20 at OCA do Ibirapuera. 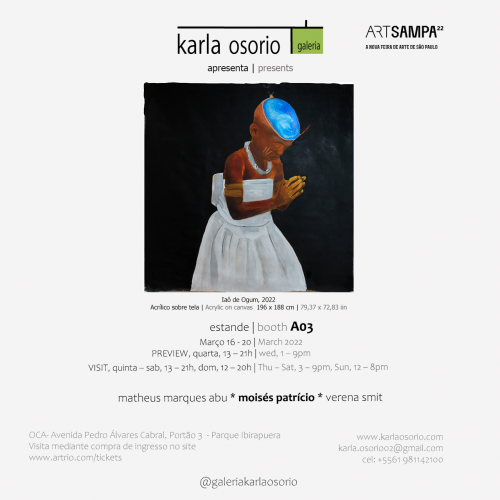 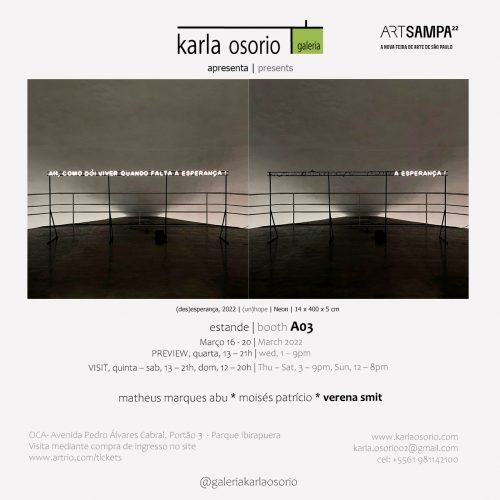