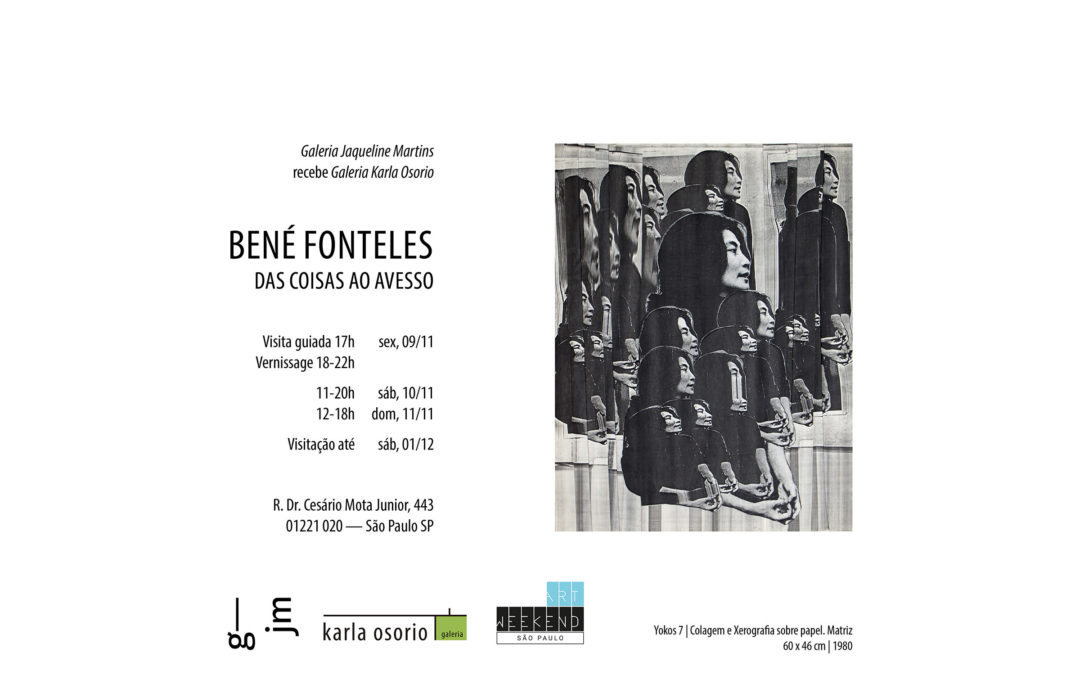 The gallery Jaqueline Martins participates of the 3rd edition of the project Artweekend São Paulo, between November 9 to 11th. The events is part of the action Galleries receives Galleries, promoted by the Brazilian Association of Contemporary Art – ABACT – and presents Bené Fontele’s solo show, partner with his exclusive representation in Brazil, Karla Osorio from Brasília, Brazil.

About the exhibition
The show will include Works produced between the 70’s and 2018 and depicts the poesis that permeate his work, gathering affective objects that dialogs with the passage of time, about things and stablishes provocative and intercultural talks, where the body in art and spirituality. His historic work is also characterized of great political end ecological engagement, preoccupations that to this day is still present.

Fonteles recriates in his productions (des)objetos filled with a human artisany and from elements of the natural. He gathers elements despised and without any apparent or immediate utility and frequently, without respect to its matter. He is interested in the opportunity to ennoble them, by revealing in them a poetic aspect, so that the others, just as the artist are captivated by the possibility of the poetry, always renewing them while recreating the world.

As Júlia Rebouças, co-curator of the 32nd Sao Paulo Biennial (Incerteza Viva, 2016 – in which Fontéles had a historical participation) recalls: “there is a guiding line of his work, the approximation of different universes, the relation of materials and cultures. It is awe-inspiring, as in the caption of the works, we understand that, in the sophisticated sculptural composition of the pieces, it occurs the encounter, gathering and discovery of elements from different contexts. There are artifacts that approach and distinguish themselves in texture, form, smell, time, and above all, origin, understanding its source not only as the location in time and space, but also as the great cultural repository aggregated to the object”.

In the other hand, the curator of the Instituto Tomie Ohtake (SP), Paulo Miyada understands that the artist is “a pioneer of the ecologic debate and indigenous in Brazil, being responsible by a whole “artivist” experimentation – as the artist himself designates his conjunction between art and activism – unprecedented in a country that unfortunately is blind towards its origin and fate. What is no easily seen, unless by being present to his works, is that Bené Fonteles is also one of the keenest producers of tridimensional works in Brazilian art. By adding few everyday e elements, traces and fragments of other material cultures he manages to devise new meanings forms and objectualities. It is not mere appropriation or assemblage, hence the creation is deep, deviating through an enormous synthetic capacity and produces almost alchemical renewals of the begotten meanings. Such exponential release of energy as from the apparently little matter is often accompanied of great sensibility in the choice of words and poetic concepts. If this has not yet been duly recognized by the contemporary art establishment in the country, it is only by the massive asymmetry in the treatment of artists according to their proximity to certain poles, forms and themes”.

About the artist
Bené Fonteles