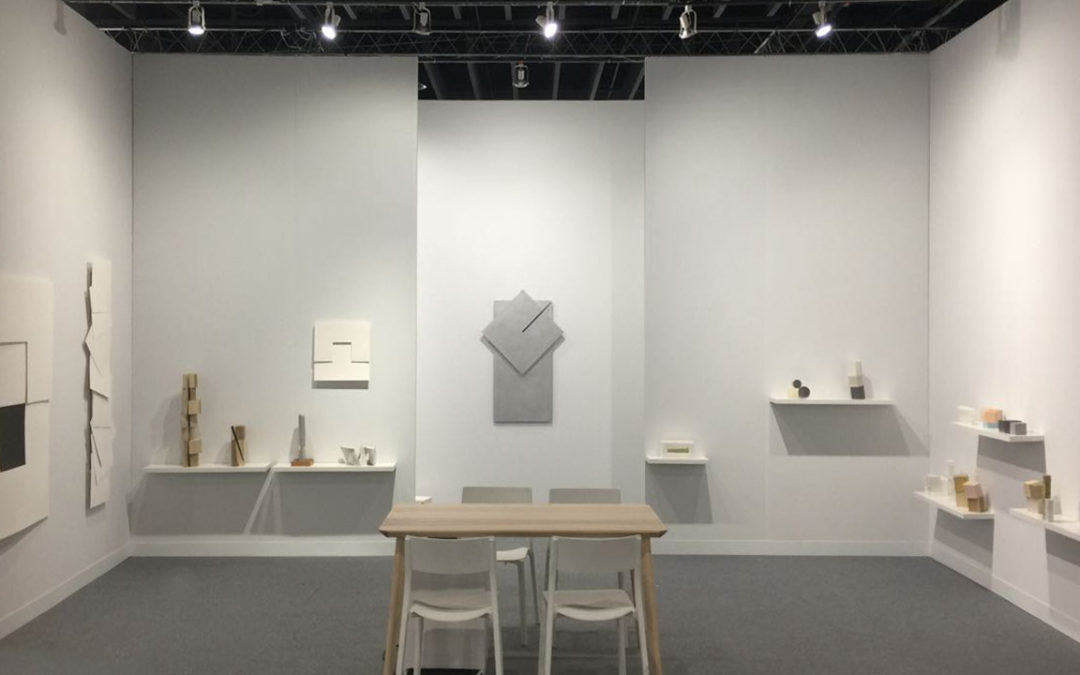 Karla Osorio Gallery participates for the  second time in VOLTA New York. This time presenting two artists from different origins and generations: Estela Sokol and Roland Gebhardt. The central point of this dialogue is the minimalism and geometry.
Gebhardt (1939) is contemporary of the great minimalists as Carl André, Donald Judd, Shapiro, Richard Serra, Sol Lewitt etc with whom he participated in the historic show “The Minimalist Tradition” in 1979, at the Aldricht Institute. His choice for isolation after the 80’s allowed him a most intact and pure artistic production, far from other people regard. As recalled by the italian curator Biagio d’Angelo, it is almost like “le bon sauvage” from J. J. Rousseau isolated from influences of society.
His long research around the “void”, exploring materials such as marble, wood, aluminum, steel, zinc and paper produced amazing and strong body of work dealing with mathematics, philosophy and architecture. The negative takes place in all his pieces, even by the created/ escavated void, or by the black painted surface.  He is in a constant and long search towards a new vocabulary, paradoxically since many years, but new and challenging.  Through a methodical and obsessive repetition of objects and themes, a predilection for volumes and their enigmatic nature, the artist “interferes” using cuts and incisions, that suggest that art can still interfere in rigid or organic materials, such as boulders, wood, steel, paper and books. The cuts rewrite the history of the material, denatures it, creating new geometric lines, outside the traditional thought of the drawing, that fills what is called by the artists, as the “linear void”, that works as an original connection between volumes or elements. Recently he incorporated paint in this works and we will show for the first time those amazing pieces.
Sokol (1979) graduated in architecture seeks the light, the purity, the powerful synthesis of the matters she chooses to explore. Polyester, marble, foam, styrofoam, encaustic, granit and different sort of stones are her main elements, from the hardest to the more soften, the results she gets coincides. Using collage or sampling mounting, approaching almost magnetically, she extracts the essence of the material. Her interference is minimal, but precise. Many of her work quite “fly” or “float”, true delicacy turned into powerful Art.  Although her gesture is in a large part painting, she refuses to paint, she doesn’t want to covers de surfaces on which she works. So the color of her canvases and sculptures are determined solely by the industrial materials.  She also limits to using the colors of the products she finds ready. She does not mix pigments, nor have a palette.
She creates an expansive set of ideas and sentiments through the seeming solid body of a paint or sculpture. Emphasizing how delicate they are, most of her works are small and reveal certain artisan character in its manufacture. Whether produced out of PVC and/or PV, with its beams distributed and placed both juxtaposed or overlaid though the frame, the paintings reveals a translucency between its layers and the monochromatic scheme. However, in her sculptural creations the comfort of symmetry is barely present. Its allegedly clumsy construction and material composition explores an unsettling intimacy with its density, volume and verticality. Its textures and their poriferous forms compose a network full of symbology, an already failed geometry, unorganized, unsecure, and about to collapse, just like as we are, humans.
Check our PREVIEW with some images of works available.