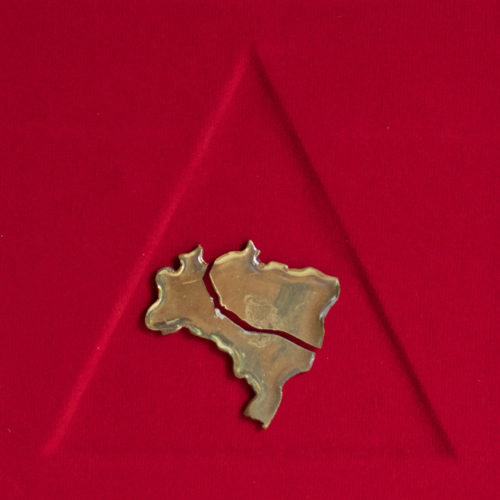 The artist assembles works that are inspired and derivative from a dialogue with a marginal crafts and factory production that nourishes de symbols the power institutions. During her infancy, her parents worked as tailors inside the Army’s Headquarters of Brasilia, through the years they accumulated medals, ribbons, coat of arms, that lose their function as a result of wear or due to minor production errors. Gabriela saw in these discards a living and substantial possibility ready to be embedded in her visual perception. These articles are tirelessly altered in the artist’s hand, starting from a process of cataloging and cultivating intimacy with what she perceived to be poetic particles: thus, the object resists its erasure, an assumed change in the narrative of a present in constant negotiation.

There is an already inherent history of matter, told by the passage of time, present in the marks printed on each of the metals and tapes that have often been discarded or rendered useless within its primary context, this context, which endows them with the power of the symbol. Mutti decorates each of these objects by activating them in the domain of affection, making use of the most primordial intention of image: as a catalyst agent of memory in the one who observes it.