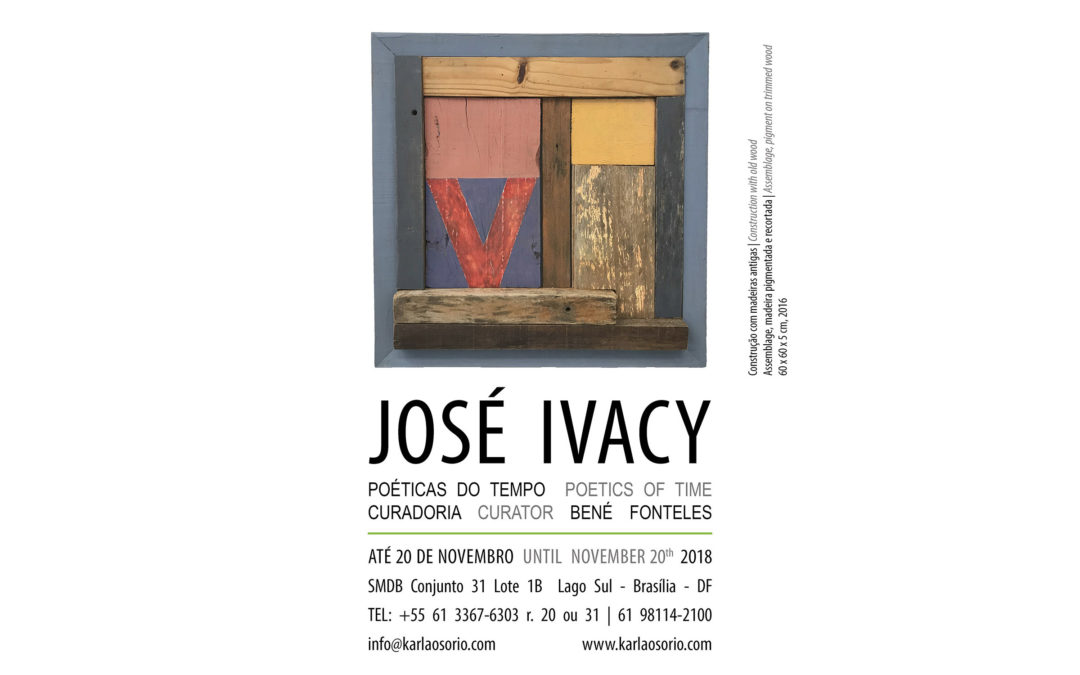 Karla Osorio Gallery presents the solo show of the artist José Ivacy (MG/BR), presenting artworks from the last 30 years all using mainly wood and metal as support which are influenced by time passage. The curator is Bené Fonteles and the show occupies Galleries 1, 2, 3 Pavilion 1 and the open garden, with several outdoor sculptures.

According to the curator words, “the amalgamated wood by the force of time spurs the veiled color of the painting, it unveils in discret patina and holds its materiality alight, the clear texture, the energy of sun, rain and wind, providing it an angular poetics. The remarkable patina in the master and informal craftmanship, enlightens the artist, who transforms things and beings of Cerrado into his precise source to inaugurate with mastery, the reinvented form. The result is a daring sensitive geometry, in a profound dialogue with time passing over such matter which it is not only the support. It is also the symbiosis and the breeze of the color on the flatness. It is a relief granting a breath of the essential in order that the matter vibrates with a solid force, dancing at the same time with a vast delicacy. It scoops between the objects like cement and wood in a powerful conversation of architectural construction of “invisible cities” which touches us and retouches the infinite imagetic field. The cuttings José Ivacy makes in the wood and the way he incorporates/paints it with a singular purity exposes it to the merciless voracity of time. It is an experimental contribution of extreme liberty for us who fears the ephemeral and the impermanence, instead of taking advantage out of them. What we learn is a unique constructive project in this works, outside and inside of any exhibition premise, unique and transcendental rare contributions as did Celso Renato, Emanuel Nassar and Marcone Moreira. Artists who know what it’s like to fear the ownership and the “time king”, transformer and transmuter. From the form they exploit its deconstruction and reinvent themselves, reinventing the painting so it doesn’t fall into the formalist trap. Ivaçy releases the painting as an object with extreme courage and boldness, making out of the time and matter a Unity in Poetry”.

José Ivacy (MG/BR) – Was born in 1962 from Morada Nova/MG, since the 80’s he works intensively with artworks that have artcraft characteristics in to it and the manipulation of a diverse range of materials, mainly wood and metals. In his paintings and objects, we perceive a complex set of geometric and organic forms, wandering its own path in the grounds of inventiveness. He participated of many group shows in Brasilia and more recently he dedicates himself in his studio in Brasilia, where he lives and runs one of this artist projects, gallery ManOObra